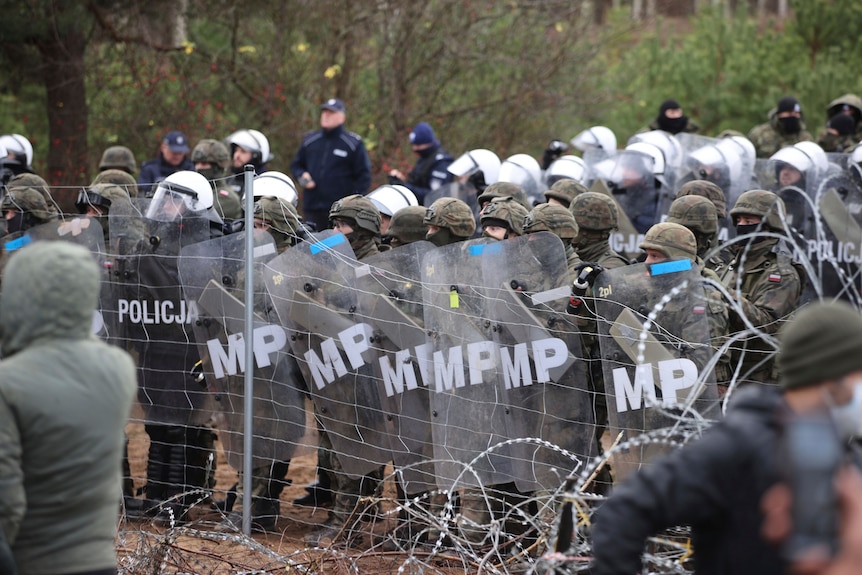 Polish authorities say they have stopped hundreds of asylum seekers from illegally entering the country from Belarus.

Warsaw has accused Belarus of trying to spark a major confrontation at the border, where thousands of people have been gathering.

Video footage from Belarusian media has shown people using branches and long wooden poles to try to get past a border fence as police helicopters circled overhead.

A spokesperson for Poland’s security forces Stanislaw Zaryn said the crossing attempt was “coordinated” by asylum seekers he said were “controlled” by Belarus forces.

The European Union has accused Minsk of encouraging migrants from the Middle East and Africa to cross into the EU via Belarus, in retaliation for Western sanctions on President Alexander Lukashenko’s government over human rights abuses.

Current situation on the Polish-Belarusian border. We are dealing with organised destruction of border fortifications. There are also direct attacks on Polish Border Guards officers, police and soldiers. https://t.co/XS3Ec6dej7

— Chancellery of the Prime Minister of Poland (@PremierRP_en) November 8, 2021

Polish officials said there were currently 3,000 to 4,000 migrants near the border, and more than 10,000 others across Belarus ready to try to cross into Poland.

“We expect that in the coming hours attacks on our border will be renewed by groups of several hundred people,” Pawel Soloch, the head of Poland’s National Security Bureau, told reporters.

Current situation on the Polish-Belarusian border. We are dealing with organised destruction of border fortifications. There are also direct attacks on Polish Border Guards officers, police and soldiers. https://t.co/XS3Ec6dej7

— Chancellery of the Prime Minister of Poland (@PremierRP_en) November 8, 2021

Warsaw said it had deployed 12,000 soldiers, border guards and police to the border.

The Polish Border Guard also announced the border at Kuznica, near where migrants tried to force their way through, would be closed.

“The closure of one of them can … be treated as a kind of economic sanction.”

Mr Lukashenko’s government has repeatedly denied manufacturing the migrant crisis, blaming the West for the crossings and poor treatment of migrants.

The Belarus State Border Committee confirmed many asylum seekers were moving towards the Polish border, but said Warsaw was taking an “inhumane attitude”.

Committee spokesperson Anton Bychkovsky said the migrants were seeking to “exercise their right to apply for refugee status in the EU”.

Charities have said the asylum seekers are facing freezing weather conditions and a lack of food and medical attention.

Poland said seven migrants had been found dead on its side of the border, with reports of more deaths in Belarus.

Some humanitarian groups have accused Poland’s ruling nationalists of violating the international right to asylum by pushing migrants back into Belarus instead of accepting their applications for protection.

But Poland has maintained its actions are legal, with Prime Minister Mateusz Morawiecki taking to Facebook to declare the border is “not just a line on a map”.

“The border is sacred — Polish blood has been spilled for it,” Mr Morawiecki wrote.

The Polish government has called for tougher EU sanctions against Minsk, while the Baltic states Lithuania, Latvia and Estonia have issued similar calls.

In recent months, both Poland and Lithuania have seen thousands of migrants trying to cross into the European Union.

Ms Von der Leyden said two top EU officials would travel to the main countries of origin for the migrants to “ensure that they act to prevent their own nationals from falling into the trap set by the Belarusian authorities”.

The EU also wants to target airlines from third countries that help transport the asylum seekers from the Middle East to Belarus.

The US State Department said it was concerned by disturbing images and reports from the Polish border, and called on the Belarusian government to immediately halt its campaign of orchestrating and coercing irregular migration flows across its borders. Senegal votes in municipal and regional elections on Sunday-Zamkuwire

Senegal votes in municipal and regional elections on Sunday-Zamkuwire